“The civilization of the River Plate is not the work of Europe: it was a distinctly work of Asuncion.”

The phrase of the Paraguayan poet and ex-president Natalicio González sums up part of the history of the Southern Cone of the Americas and one of the topics that most arouse pride in Asunción and its people.

With our tour, discover how Asunción became the Mother of more than 70 cities in South America more than 480 years ago and the influence of the powerful Guaraní culture in the capital of a multiracial country thanks to passionate guides who love their city.

Asuncion in its beginnings was a fort founded by the Spanish crown in the territory of the Guarani in the year 1537 on the banks of the Paraguay River, acquiring the rank of city in 1541 with the creation of the Cabildo, becoming the first city of the River Plate.

Did you know that the first American Revolution occurred right here? And that here also took place the first assembly of women of the American continent? Discover with us why Pope Francis said that the Paraguayan woman is the most glorious woman in America.

Get to know Asunción and its origins, its boom in the second half of the 16th century as the center of European conquest and colonization of the Rio de la Plata and how it became the capital of the most prosperous country in the 19th century (Yes, you read it well and we tell you how it was), as well as its macabre and tragic moments with its foreign occupation during the biggest international war in the entire American continent where Paraguay confronted its neighbors, with its irreparable consequences on the population.

Discover its dark period in the twentieth century, with years of post-war political instability, new international conflicts, civil wars and dictatorship, check out the detention and torture centers of Dictator Alfredo Stroessner that speak for themselves.

The mother of cities contains labyrinths where you can wrap yourself in the sweet Guarani language widely mixed with Spanish and listen to songs in the streets of one of her beloved son and creator of the musical genre that makes Paraguay proud: La Guarania, created by José Asunción Flores. Surprise yourself with the fascinating and exotic habit of drinking “tereré” of its inhabitants (extravagant thermoses covered in leather to consume yerba mate) in the country considered the historical king of yerba mate.

Asunción today lives a new rebirth, with about 3 million inhabitants in its metropolitan area, you can check the transformation of one of the oldest and isolationist cities in South America with skyscrapers rising around the new financial district and dozens of museums, cultural events, shopping, plus a rising nightlife, with world-class restaurants and contemporary bars, and last but not least important… all that in the most affordable capital in Latin America. Enjoy it!

In front of The Panteon Nacional de los Heroes.

3- Opera of The Lopez 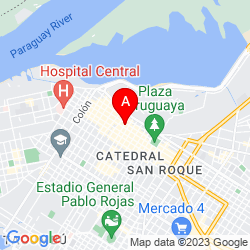